The conversation about design is evolving as the scope of design expands from physical artifacts to living systems. Increasingly, we are exploring ideas about organizational transformation and social change. In other words, we are expanding the scope of design from the physical to the metaphysical: to the social, the economic, and the political. These are issues of connection, capacity, and power.

Design as a Catalyst for Change

“You never change things by fighting the existing reality. To change something, build a new model that makes the existing model obsolete.” —R. Buckminster Fuller

The challenge, then, becomes more about how to understand the values, perceptions, and behaviours of the individuals who make up an organization or a society. Through brain research and cognitive science, we are coming to understand that we are not actually rational creatures. Rather we react and behave emotionally and invent rationalizations to justify our instinctive and impulsive actions.

Values, perceptions, narratives, and social identities are far more compelling than data, facts, information, and rational thought in the way that we understand our environment and make decisions as social creatures. 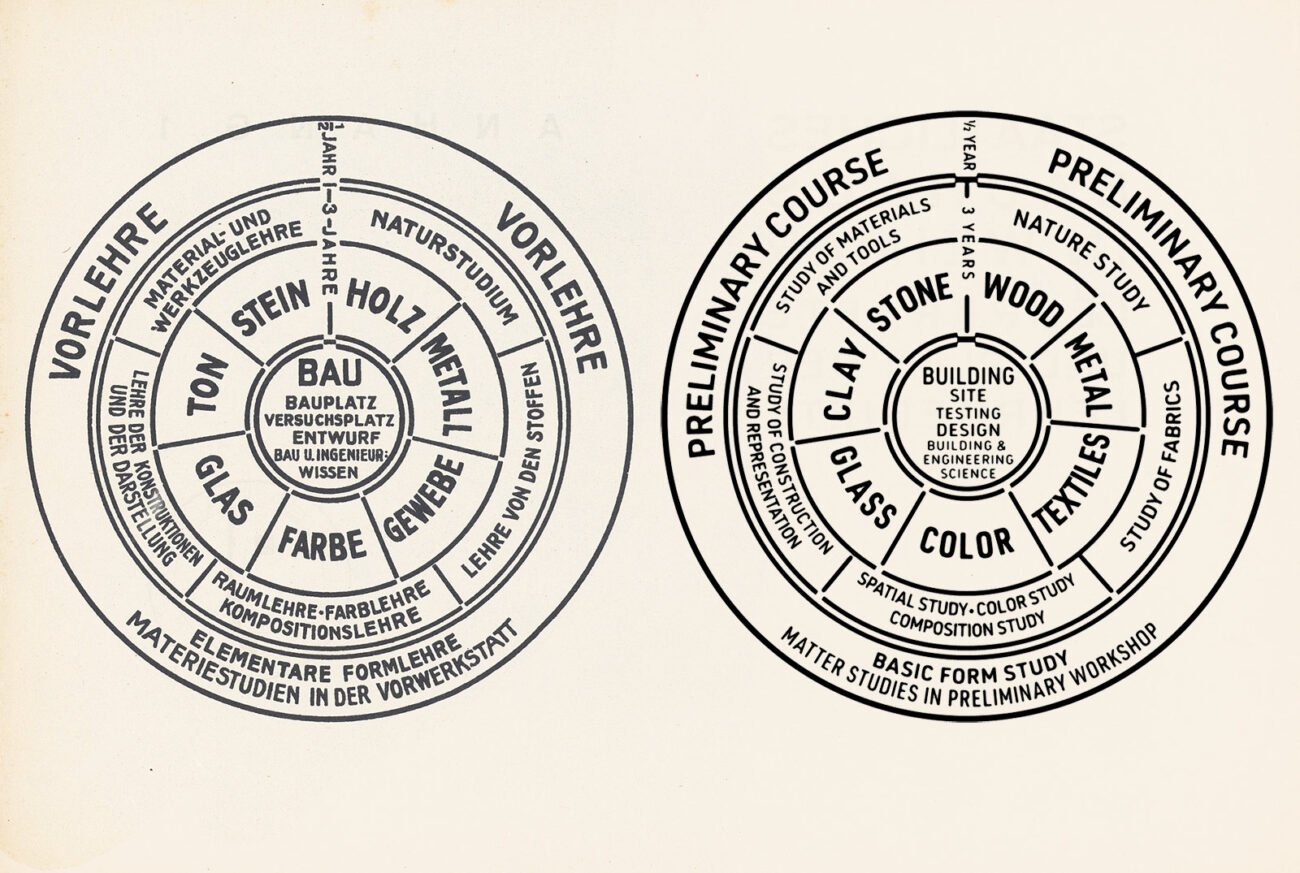 Basic Form Study at the Bauhaus

Understanding materials was the first step in the education of a modern artist, designer, and architect. The pedagogical approach of the Bauhaus become the progenitor of the curricula of the design and architecture academies of the modern world.

Bauhaus design is everywhere, but its roots are political

I begin my exploration of human experience with a curious feature of reality. There is an interesting, rather mysterious connection that I have observed between experience and reality. That is, we can conceive of ideas beyond what we sense in the physical environment that are ideals or concepts that can never exist in reality. The ideas are beyond the physical, or metaphysical.

The other curious characteristic of these ideas is that they occur in groups of three, both in the physical and the metaphysical. Humans have a curious affinity for the rule of thirds, not just in the aesthetics of art, but in all of life.

On the other hand, there seems to be a relationship between the ideals that we can conceive of and the imperfect realities within which we exist. In that sense, it is possible to conjecture that the physical is a metaphor for the metaphysical, or vice versa.

Mental models are in flux exactly because they’re embedded in a brain rather than fixed in an external medium. Additional experience with the system can obviously change the model, but users might also update their mental models based on stimuli from elsewhere, such as talking to other users or even applying lessons from other systems.

How, then, can we begin to map the human experience? How we can design mental habits, social systems, and physical environments for resilience and symbiosis with the living processes and ecology that are the foundation of our biological support systems?

To better understand our materials as experience designers, we need more holistic mental models of the human experience, as a way to understand what we are designing for. 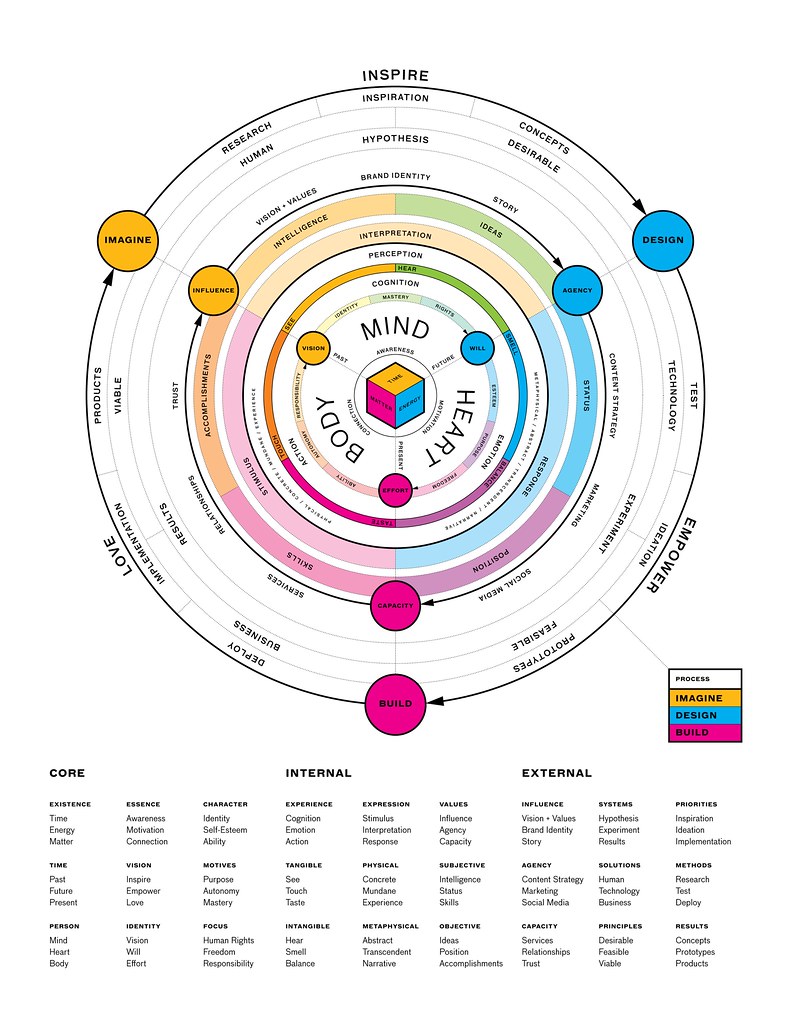 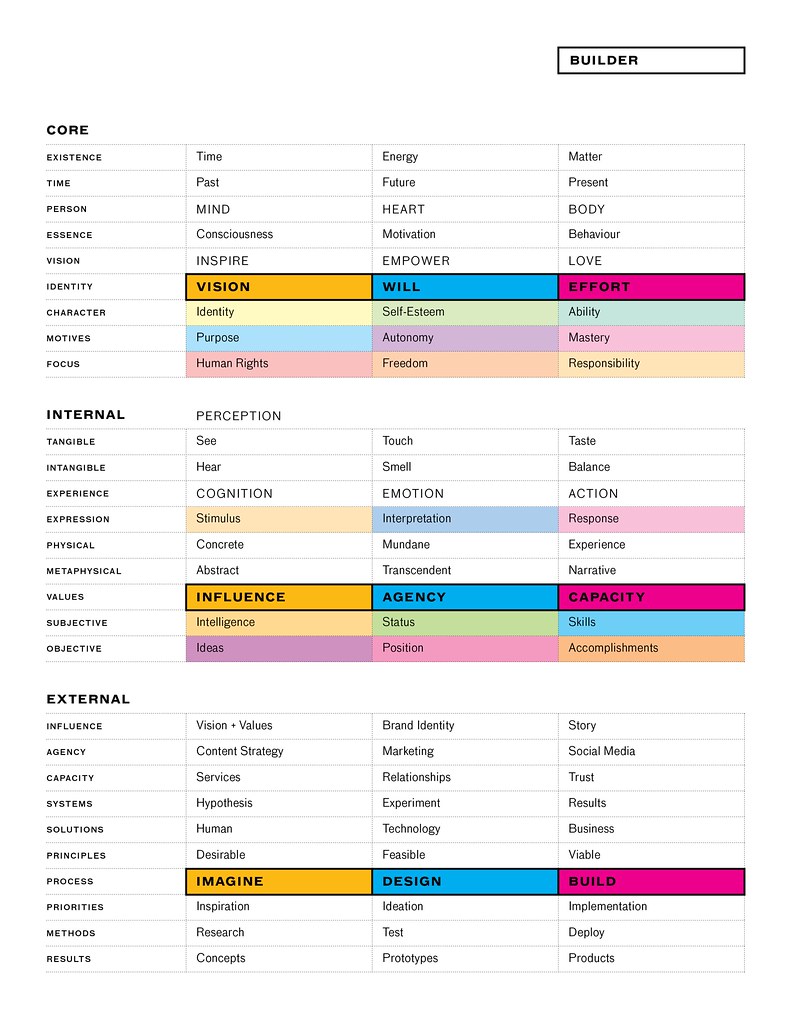 The design profession is currently facing a reckoning, similar to the revolutions in our understanding of class, race, gender, and religion. The 1700-year-old project of cultural imperialism that originated with the Roman Emperor Constantine and the integration of church and state finds its realization in the social, political, and economic institutions that have created monolithic monopolies of global power.

The unintended consequences of the tools that we have designed to shape our environment are the weaponizing of those tools as the means for controlling and manipulating populations, protecting access to scarce resources, and eliminating threats to religious, national, and corporate prosperity and security.

A healthy economy should be designed to thrive, not grow

Kate Raworth argues that rethinking economics can save our planet

The primitive limbic systems in our brains are designed to trigger the fight or flight response as a matter of survival in a world of physical threats. Senses are attuned to dangers in the environment and events perceived as threats will automatically trigger a physical and biological response of increased heart rate, a release of adrenalin, and a heightened state of awareness, along with emotions of anxiety, fear, and panic.

When this intellectual, emotional, and physical state of anxiety is prolonged, we call this stress. People who live in this constant state of fear and scarcity will tend to engage in behaviours that are focused on survival and self-preservation. This interpretation of constant threat leads to isolation and aggression, as members of a group engage in a competition for scarce resources and demonstrations of strength and dominance to control the group, protect resources, and destroy enemies. However, such isolation and aggression has a tendency to undermine the survival of the group.

An Argument for Cooperation Over Competition 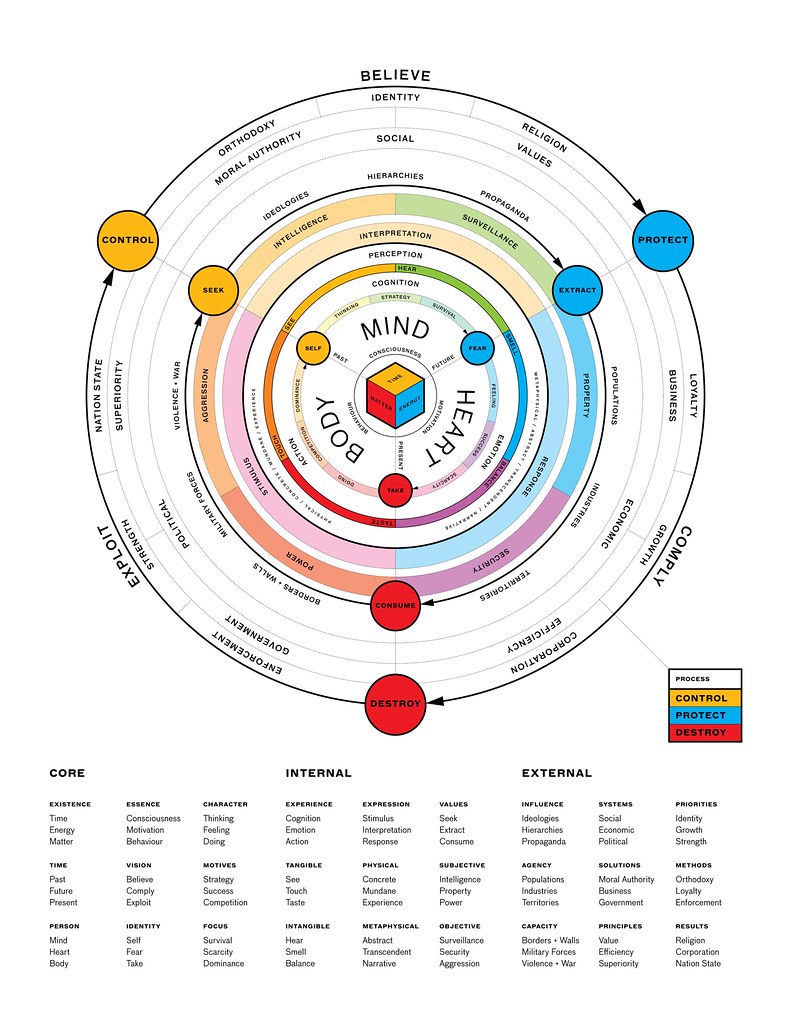 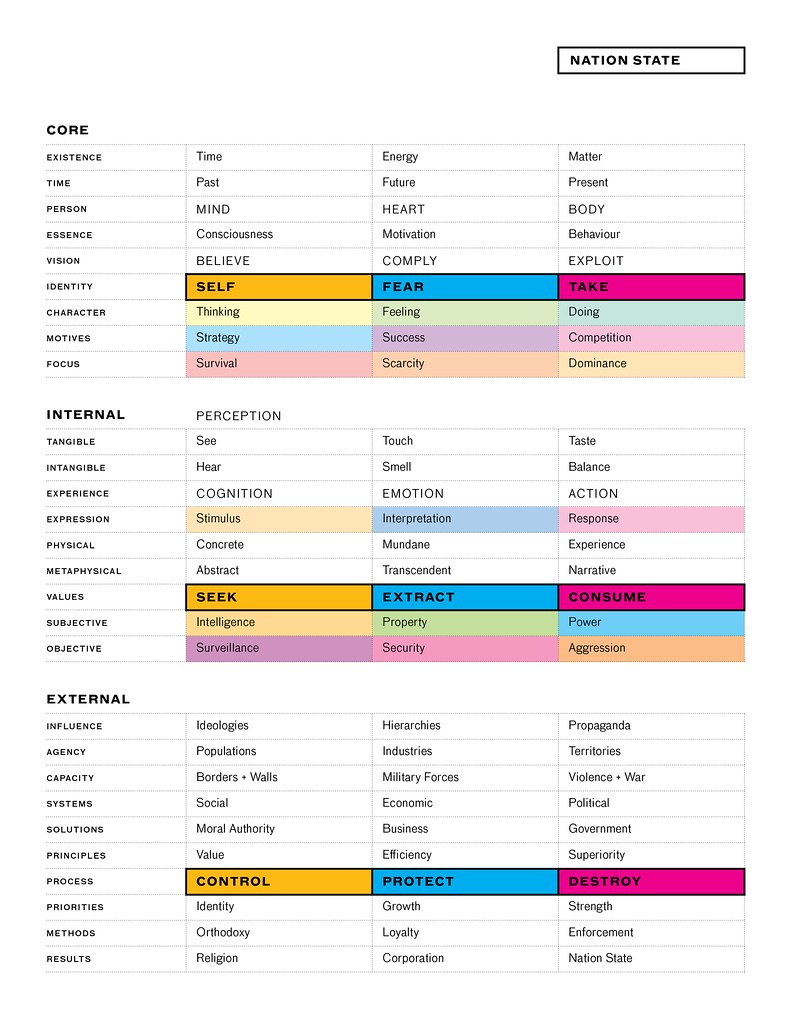 Lacking a science that helps us to conceive of a person holistically, it may be possible to draw from the observations of the generations of people who have come before us. They formulated conceptions and philosophies of the world that attempt to communicate the complex, interconnected relationships of human beings to their physical and metaphysical environments. There are things that humans experience that are distinctly tangible, but others that we cannot measure, test, or account for through physical means. Should we simply ignore this data, that which is beyond physical or empirical measurement, or is there something to be gleaned from the musings, conjectures, observations, histories, and literature preserved in ancient sacred texts?

Another mental model acknowledges a common conception of the trinitarian God popularized by the Western Christian colonization of the globe. It represents a mental model of the Creator. The book of Genesis asserts that humans have been made in God’s image. This mental model represents the human mind, heart, and body as a reflection of the trinitarian nature of the Christian conception of the divine as Father, Spirit, and Son. This model captures some common conceptions of the perfection to which humans aspire, but from which we fall short. In many ways, our societies, corporations, and nations are attempts at social, economic, and political utopian visions that fall short of the ideologies and narratives that we have formulated to rationalize our attempts to create a better world. 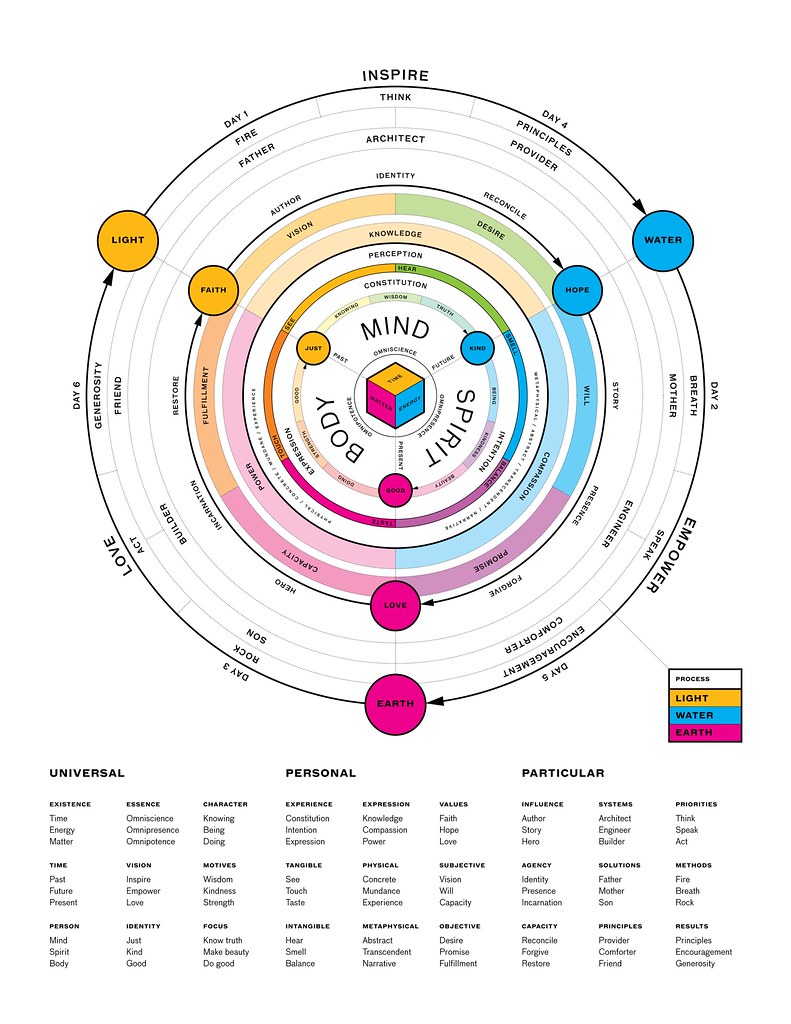 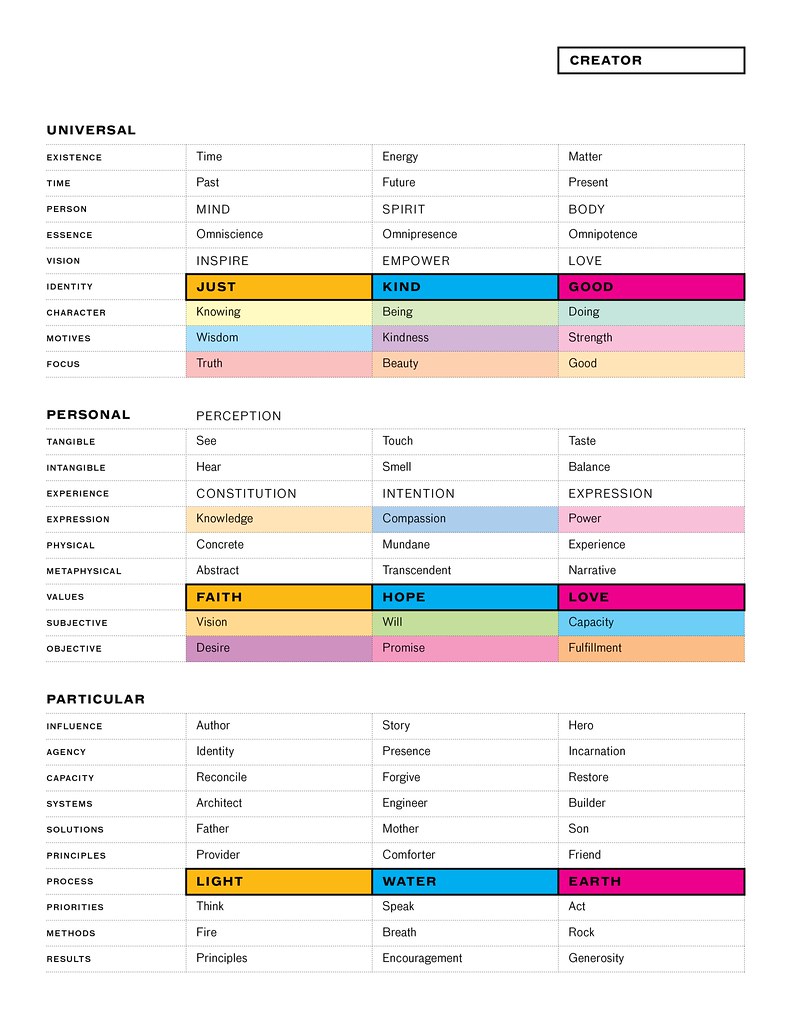 Story 4: Choose Your Own Adventure

By inviting people to participate in design workshops using these worksheets, we can explore the theme of design for resilience.

First, we need to understand what is wrong with our existing systems. They are very poorly conceived, designed, and built. However, the blanks in the model actually tell us how much agency we have in this reality. There are a lot of things that are givens, but we have a lot of freedom. Where we lose freedom is in the choices we make collectively. We have designed our own hell in the form of social, economic, and political systems that manifest as physical products, infrastructure, and architecture.

How might we design a world where we can all live together without killing each other and undermining the life support systems of the planet? 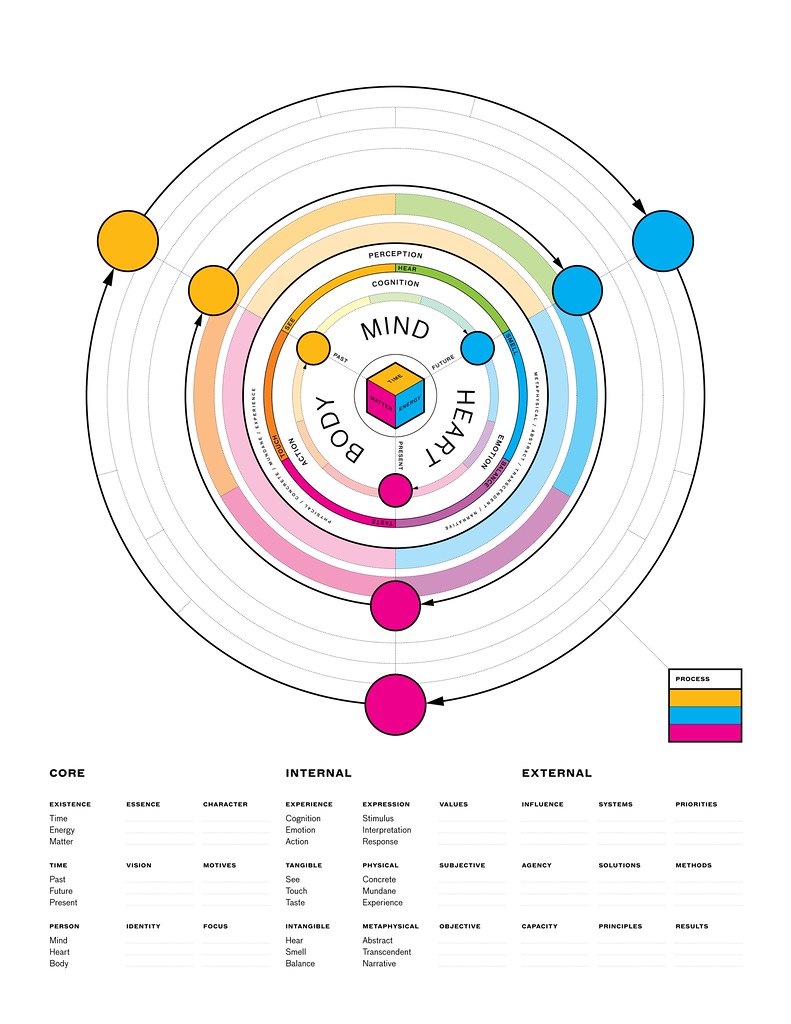 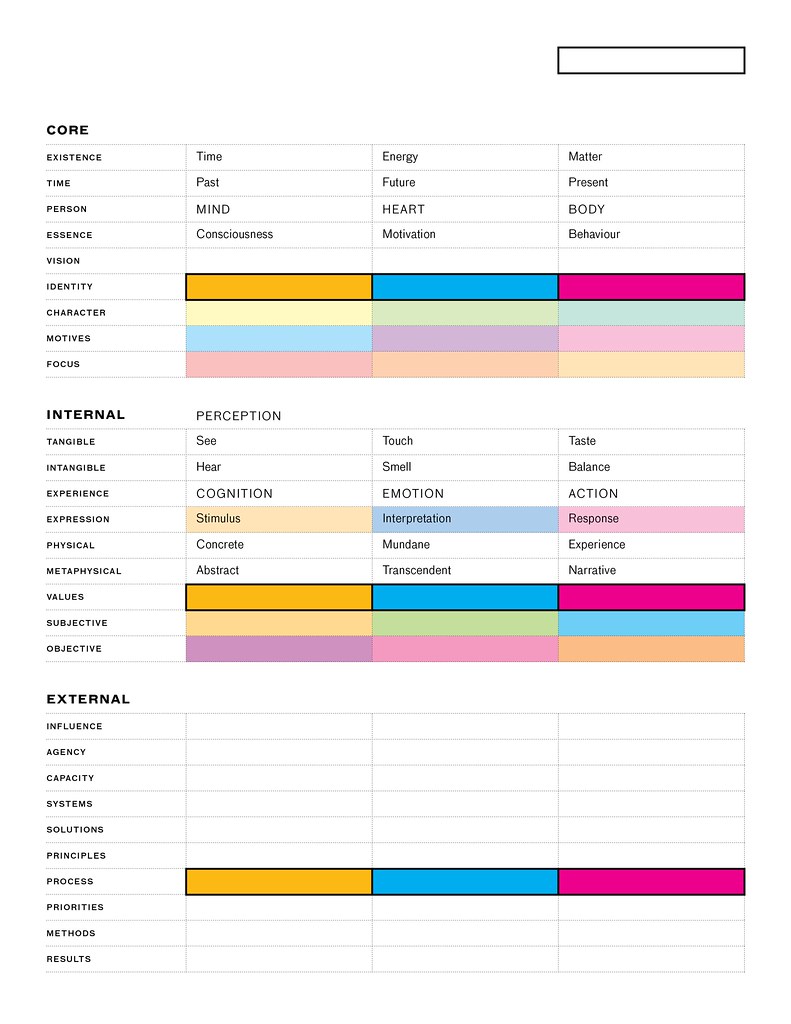 Given the challenge our generation faces, we endeavour to invest time, energy and resources in the effort of building leaders to design a resilient society. By considering basic human needs of food, clothing, and shelter, we are reimagining the metaphysical environment: the social, economic, and political. How might we build a new economy on a foundation of resilience and symbiosis?

By creating greater self-awareness, we may recognize how things can go very wrong and create virtual models with predictive power to anticipate problems before they become reality. This is a collaborative project to better understand ourselves and our place in this world, to find generative ways to live with each other and the natural world.​​​​​​​

Transcending human-centered design, this is design that seeks to learn from nature, to put into practice the knowledge and principles of biomimicry to reimagine and redesign our environment, to reconnect ourselves to our own humanity and to reconnect us to the earth and all living things. 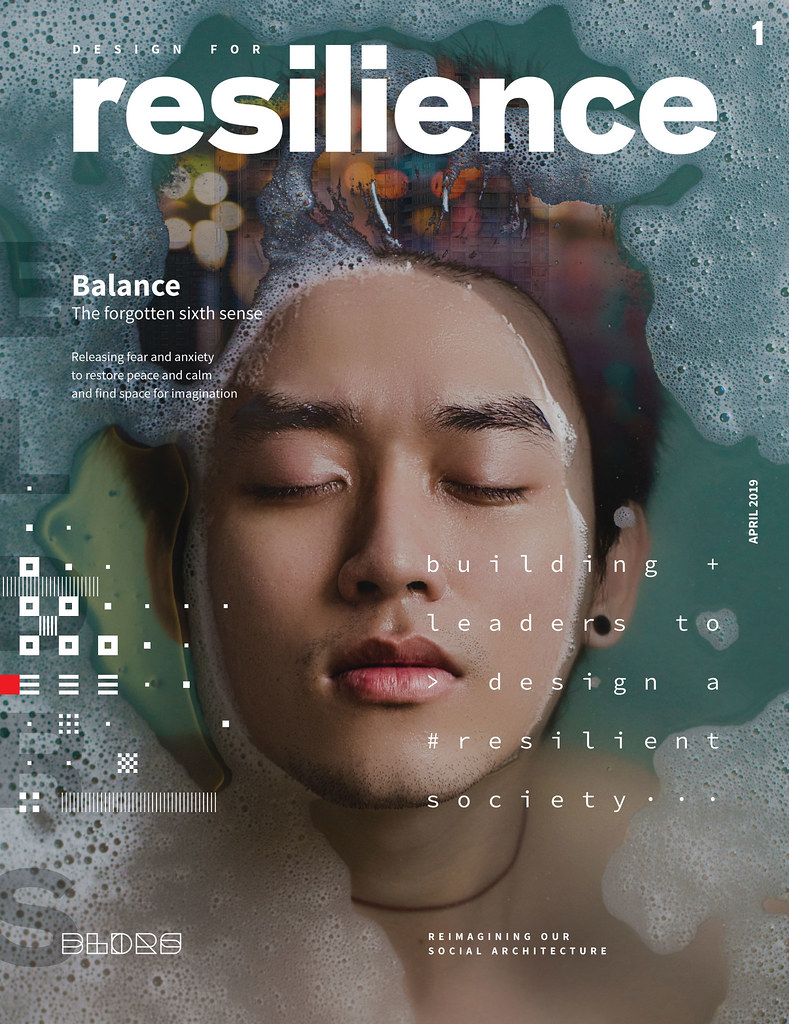 As a builders collective, our work is to restore the garden, pruning to allow for good fruit to grow. The role of the editor is to focus the narrative and tell a better story. We have allowed technology and media to overwhelm our senses. We look in a mirror and immediately forget what we look like. We instead begin to reflect everything that we see around us. As editors, we advocate for an identity, a point of view, and a movement in the direction of learning the attitudes and habits necessary for personal and social transformation, to develop people of integrity, compassion, and generosity. The builders collective is a vision to build leaders to design a resilient society (BLDRS).